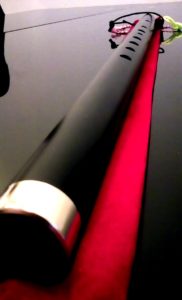 The khlui (Thai: ขลุ่ย, Thai pronunciation: [kʰlùj]) is a vertical duct flute from Thailand. Originated before or during the Sukhothai period (1238-1583AD) along with many other Thai instruments. But, it was officially recorded as a Thai instrument by king Trailokkanat (1431-1488), who sets the official model of the instruments. It is a reedless instrument, generally made of bamboo, though instruments are also made from hardwood or plastic. After many generations of modifications, it survives to the present day as the khlui phiang aw. (Źródło: Khlui – Wikipedia)

A tak to urządzenie gra: